Focus and Ambition Across the School

This week we have been carrying out a fair test in Science. We tested the friction of a moving toy car across different surfaces. We had to collaborate with our partners and be responsible because we did the experiment entirely on our own. This has helped us to become more independent. 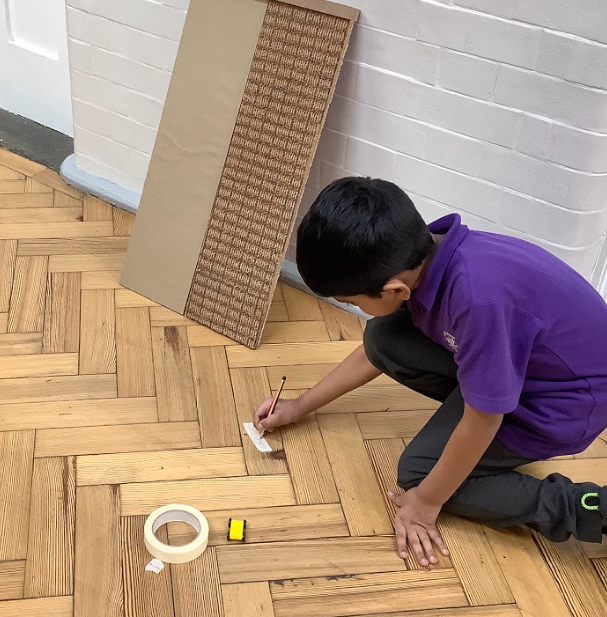 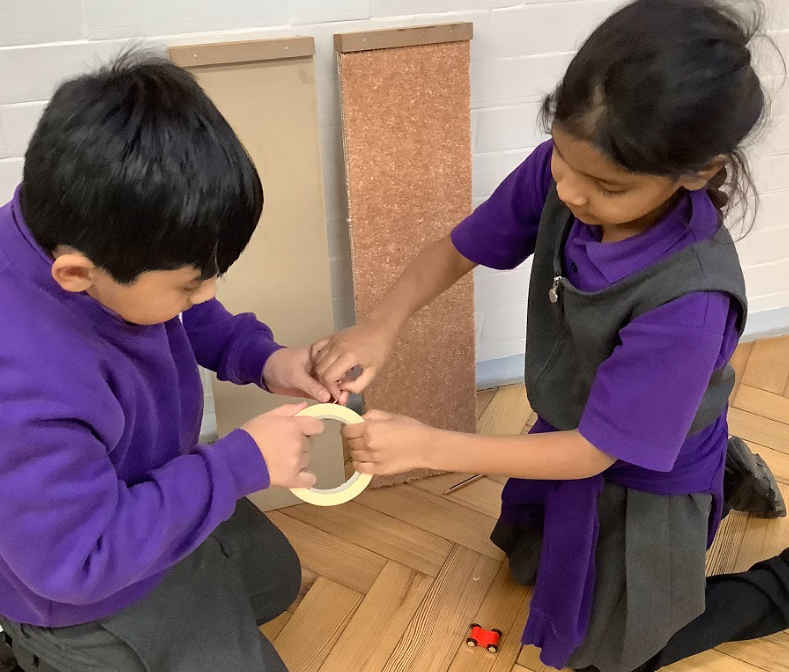 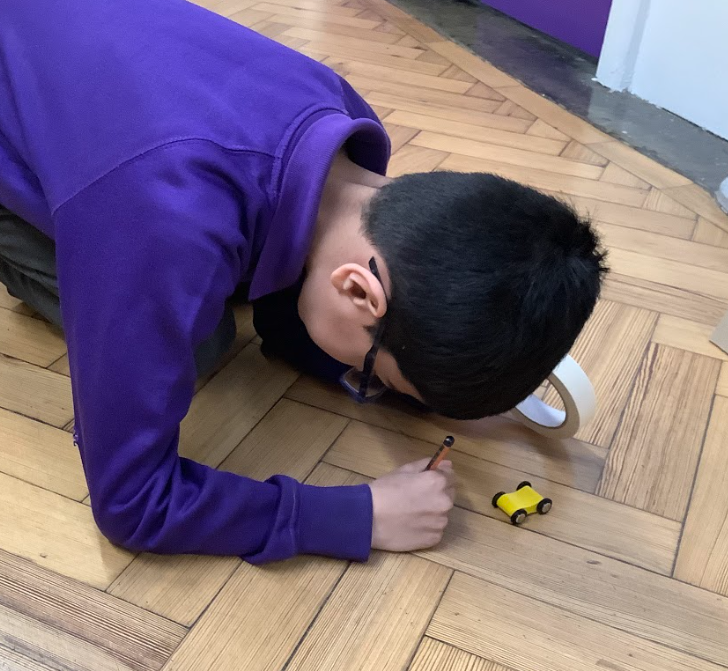 In Art this week, we have been ambitiously working on our self-portraits. We used a mirror to observe closely and draw details of our faces.  We wanted to create portraits that were better than the ones we created last year! 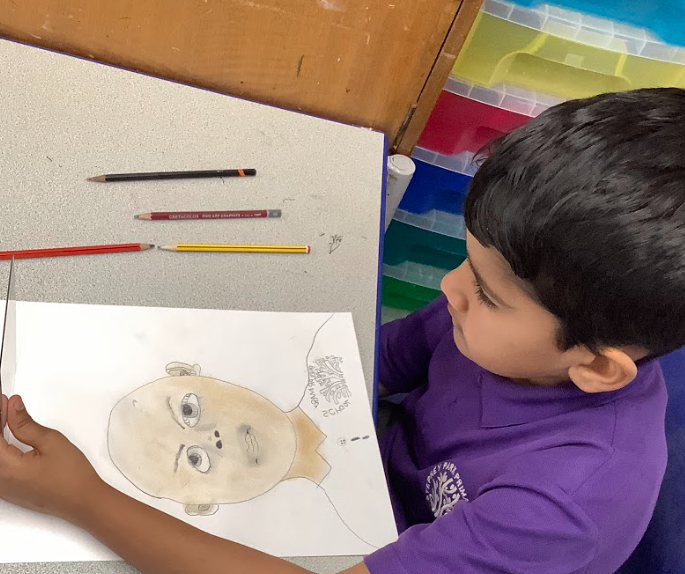 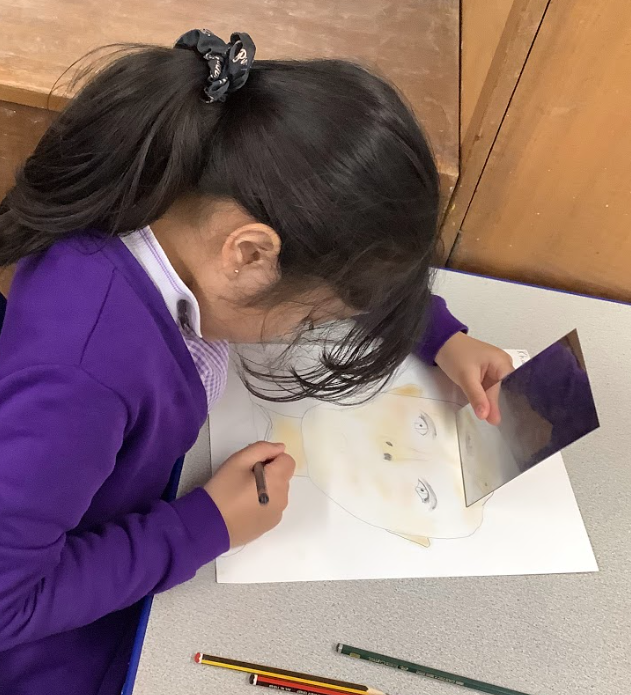 4 Pine have been collaborating really well this week during their geography experiments. We have been looking at the water cycle the past week and completed 2 different experiments to consolidate our learning of the 5 stages of this cycle! 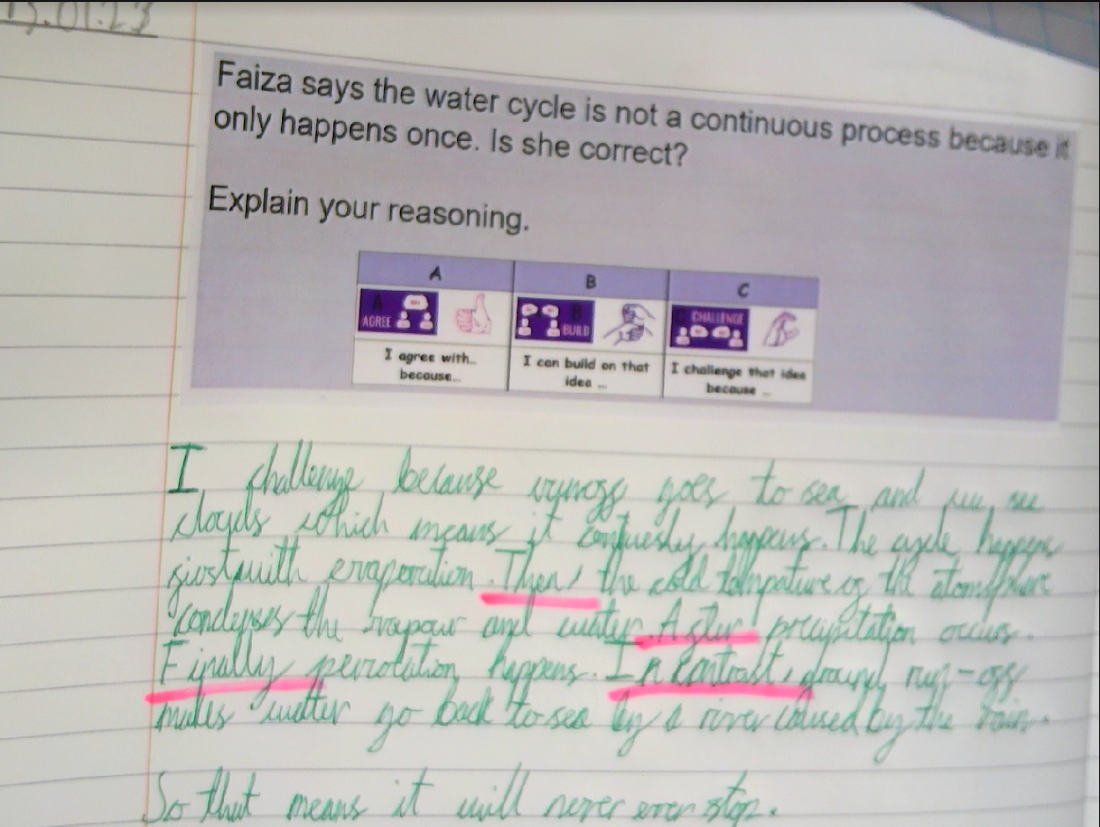 This week in Year 5, the children have completed a Design & Technology project.  They have been learning how to bake bread in the cooking room.  The first lesson involved looking at different kinds of bread, as well as thinking about what bakers need to consider when making bread - allergies, nutrition and ingredients. 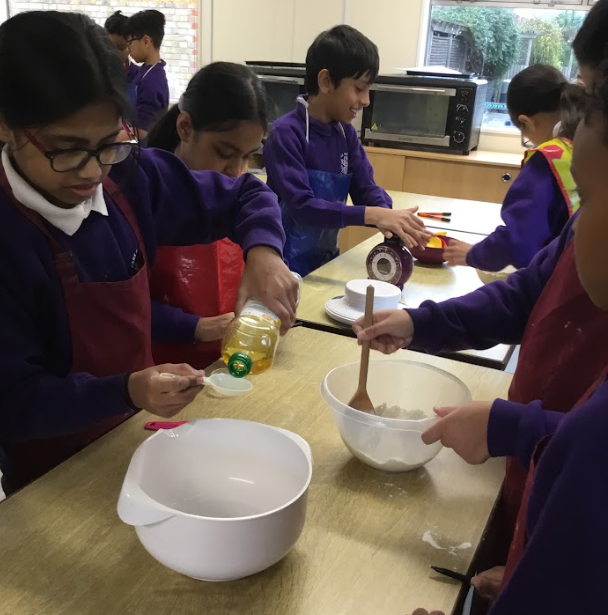 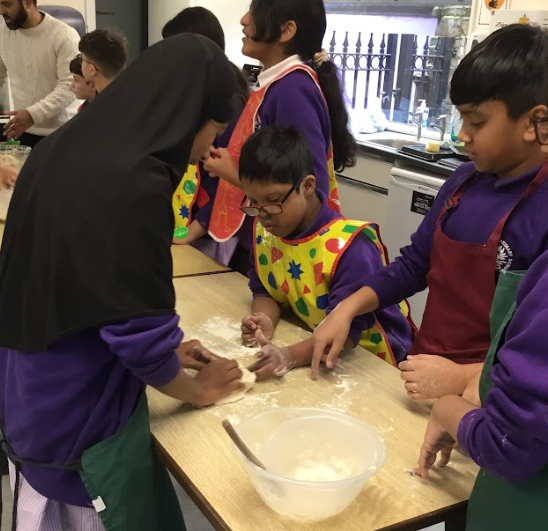 The children made a trial bread roll in the second lesson, in which they learnt how to knead dough and why it needs to be left to prove before baking.  Afterwards, they had to evaluate what worked well and what did not before the final lesson.

Challah is a special bread of Ashkenazi Jewish origin, usually braided and typically eaten on ceremonial occasions such as Shabbat and major Jewish holidays.

In the final lesson, everyone designed their own ‘celebration’ bread using challah as an inspiration.

This Term, in 6 Pine, we have been feeling ambitious and writing diary entries. We have imagined we are a character called Rose Blanche, who was a schoolgirl in Germany during World War 2. 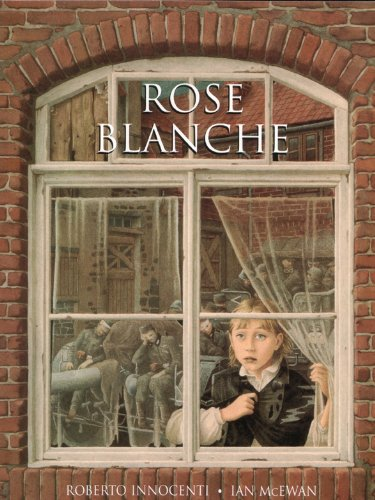 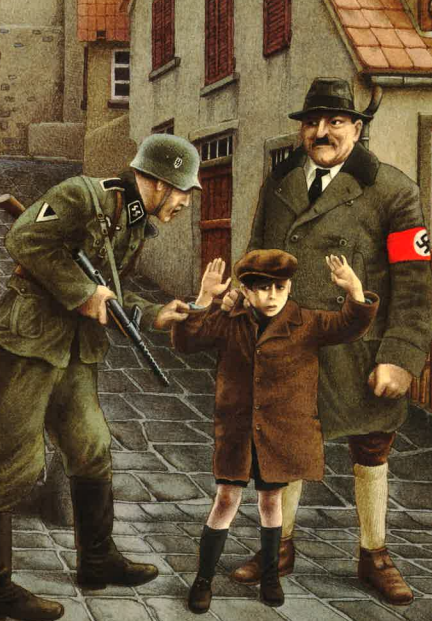 These stories were full of emotion and children used ambitious vocabulary we have been learning during our Word Aware. Read on to see some wonderful extracts…

Today, I saw something I can never unsee. My mind keeps replaying the same horrifying event. You wouldn’t believe what Germany is up to. Even thinking about it makes my eyes well up. The street that led up to the forest is where I experienced the most terrible thing ever!  - Iqra, 6 pine

As soon as the bell rang, I raced out of my classroom and into the narrow cobbled street. I was heading home just like any other day. Little did I know one little action would change the way I see life almost imperceptibly. On my way home, I saw many things: flags fluttering in the breeze, people cheering frantically and soldiers waving. I was relieved to see nothing that impacted the course of my life. I skipped through the withered, old pavement and onto the bridge. Suddenly, watching the waves pass by, I heard the most deafening sound … - Hooda, 6 Pine

Hurriedly, I rushed over; I wouldn’t miss any of the commotion. When I got a better view, I could see a little, pale boy sprinting, looking like he was trying to escape. Confused, shocked,surprised - why would he want to escape? As the soldier, who had just disembarked a white van, pointed a gun at the poor boy, immediately, the child stopped. On the outside, I was standing still; however on the inside, my body was getting hot, filling up with rage. The mayor, who arrived to see what all the noise was about, smirked at the soldier. Once he had the boy tamed, without a care in the world, he threw the innocent boy into the van. How rude! This boy was being treated like he was a piece of rubbish. Unfortunately, this was not the worst bit. Concealed in the van, various other weak, pale children lay there. At that very moment, I knew I had to follow the van. Somehow, I was going to rescue those poor souls…. - Iram, 6 Pine

We enjoy exploring and having new experiences in Nursery.  This week the children have been learning all about Chinese New Year and the traditions associated with it. We decided that we would like to make Stir Fry. 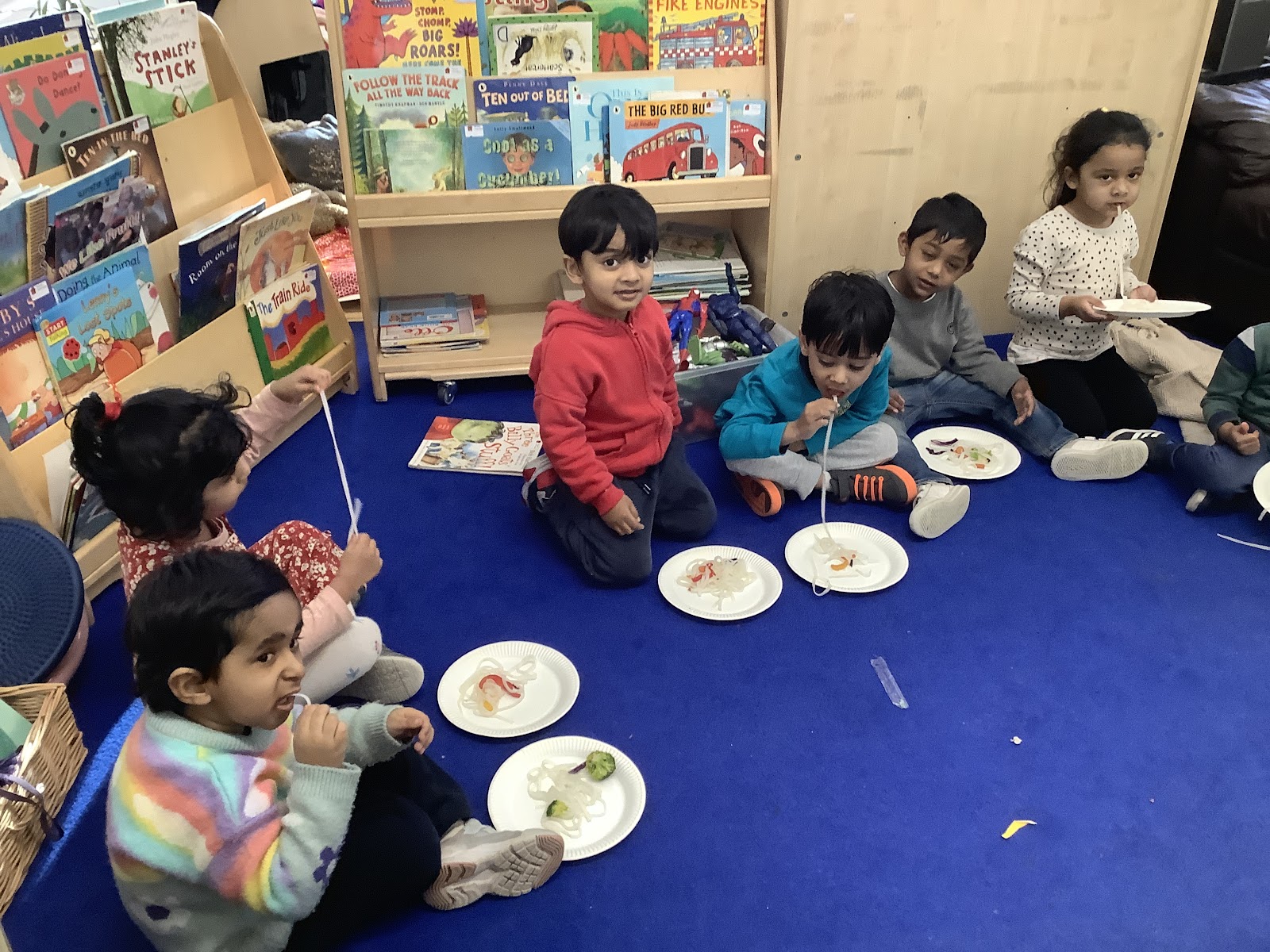 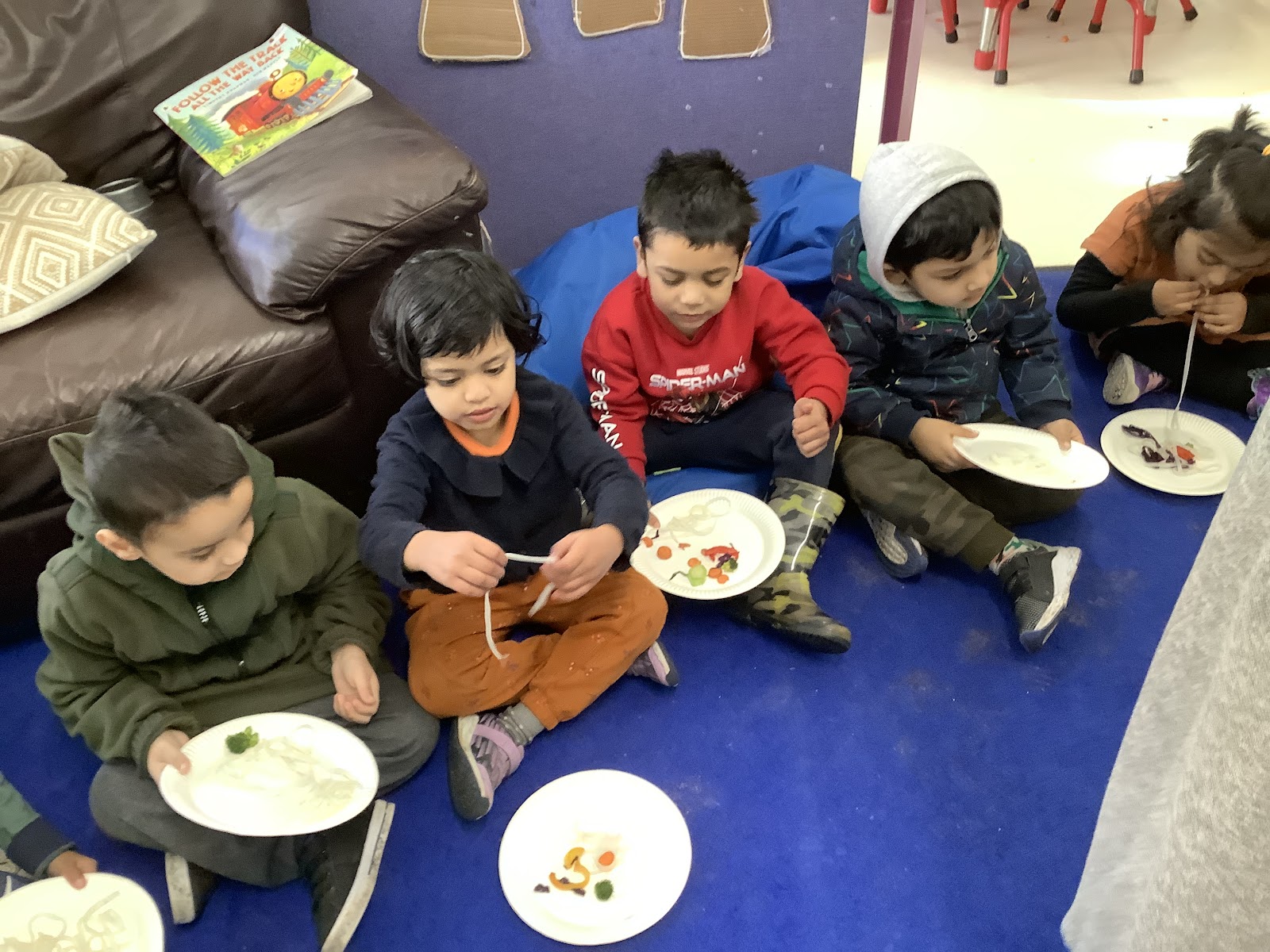 The children had lots of fun chopping and frying the vegetables. We are so proud of how independent they are becoming.  They are trying new things, and enjoying their learning. 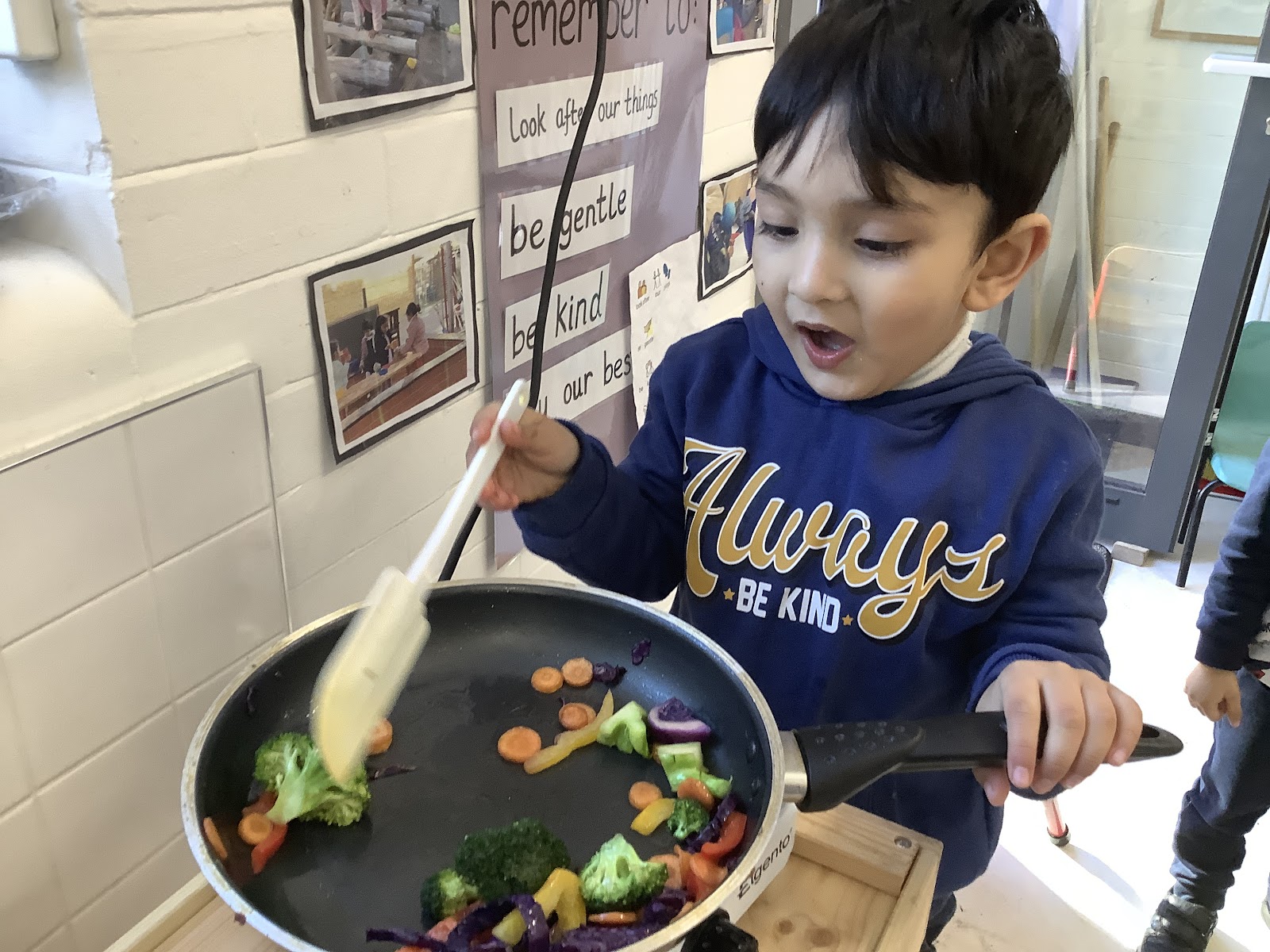 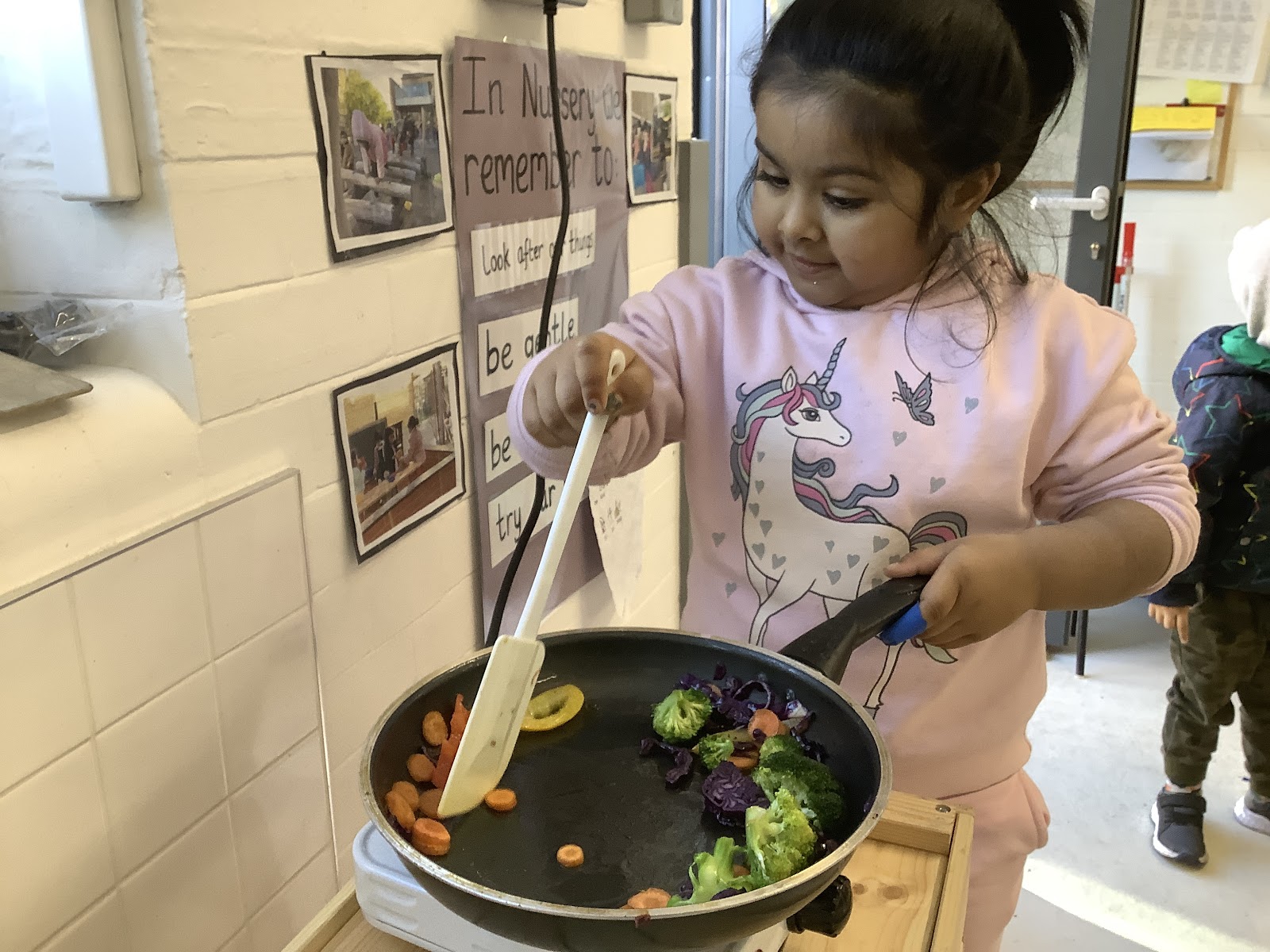 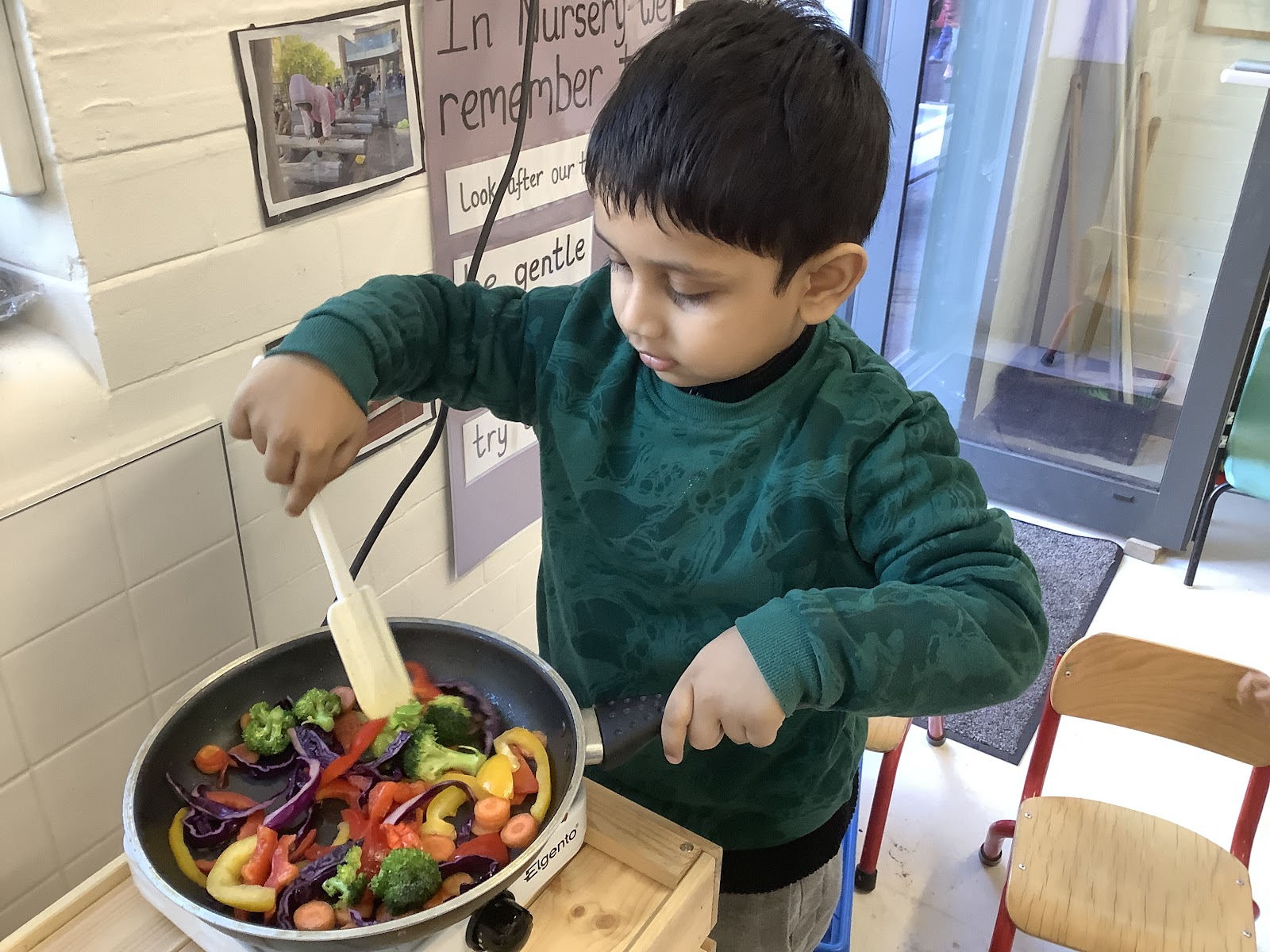 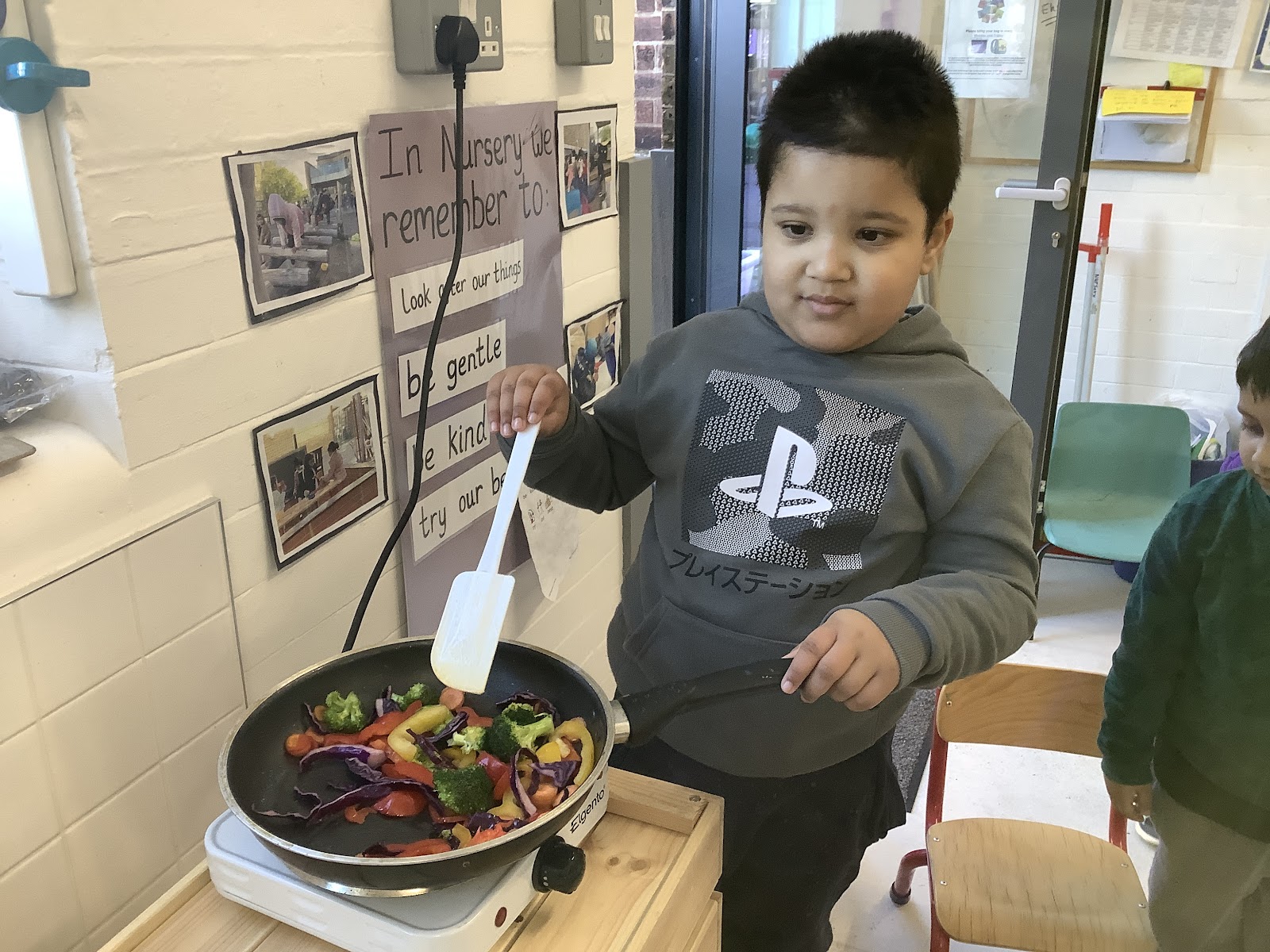 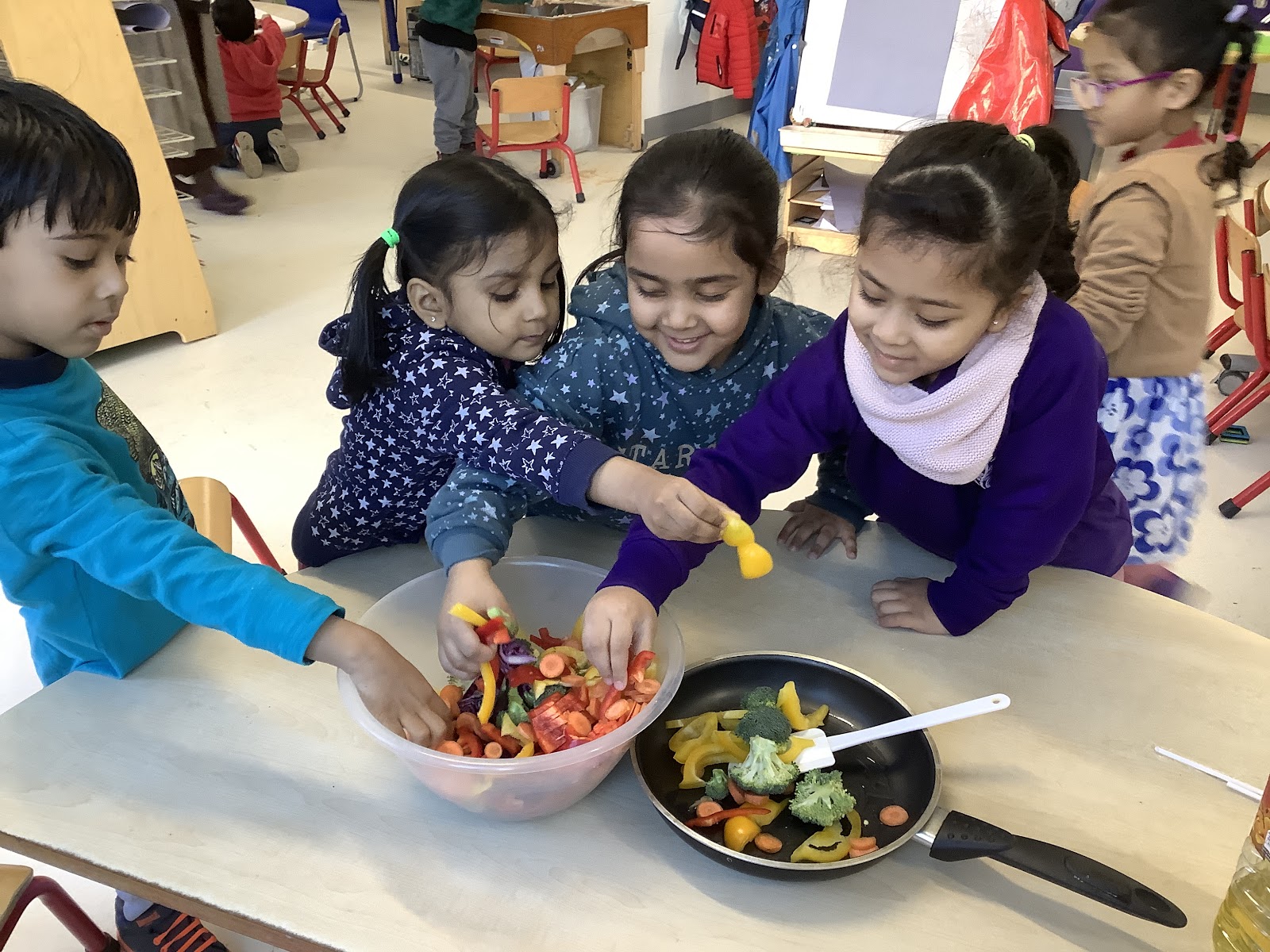 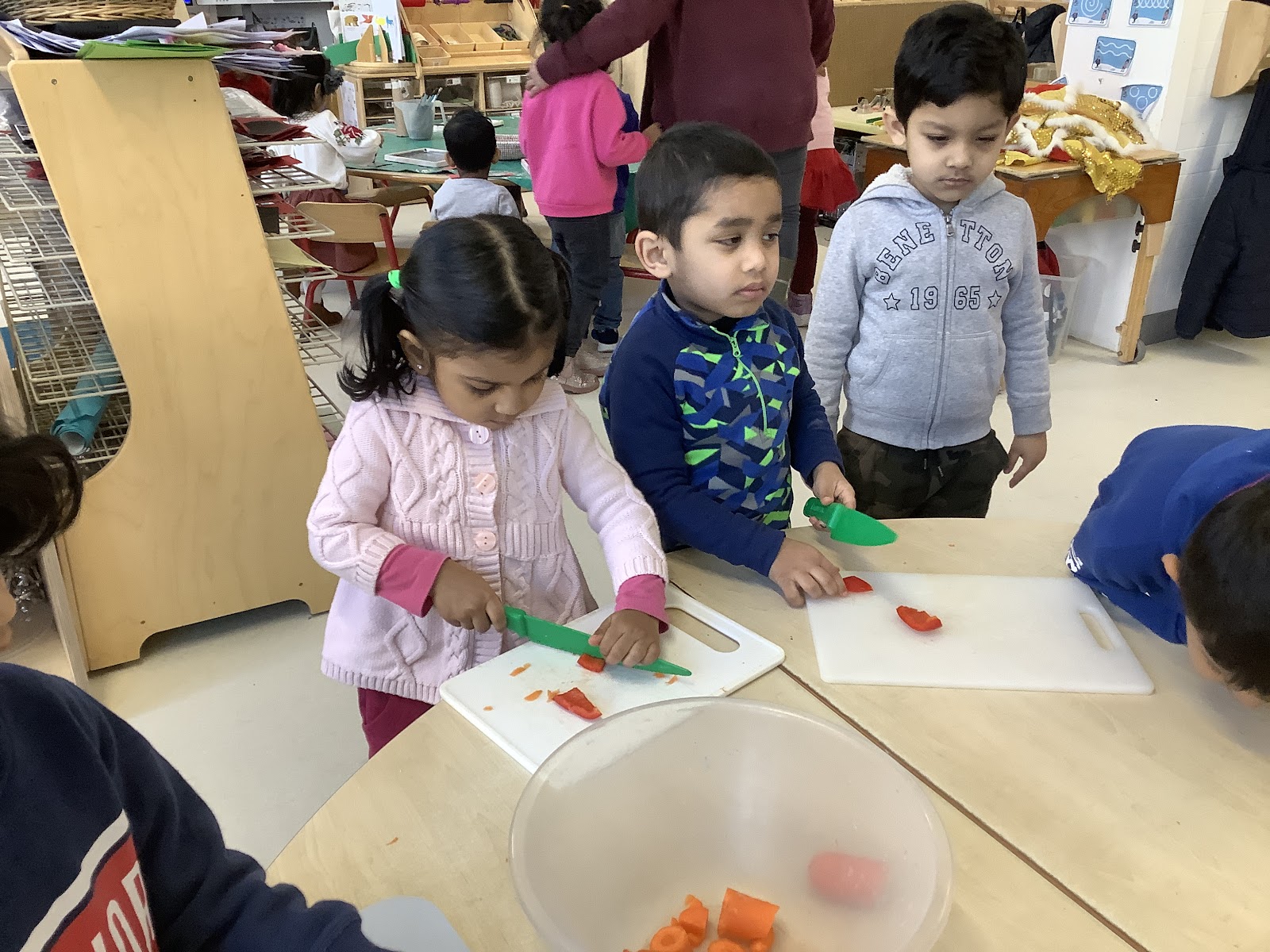 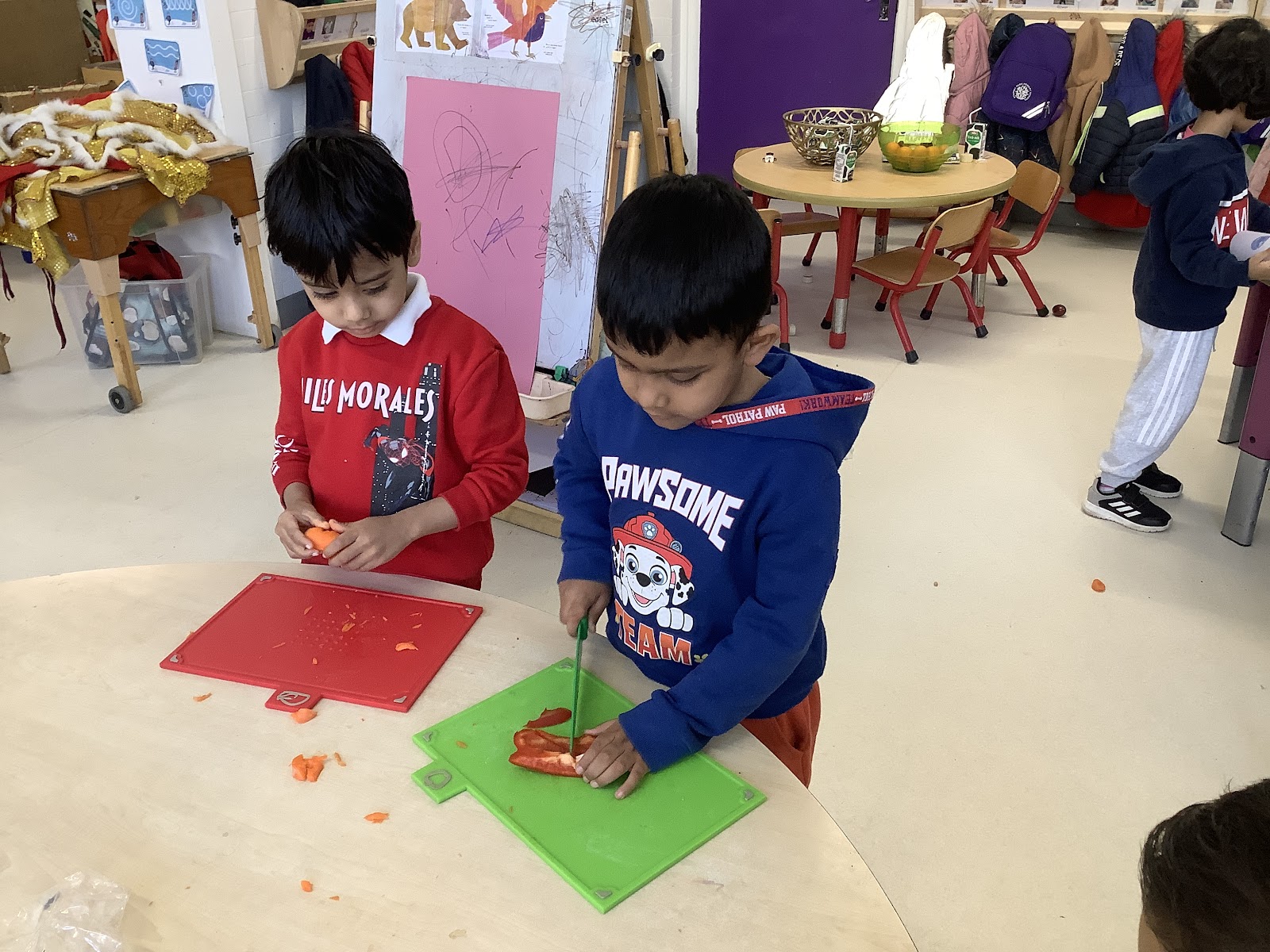 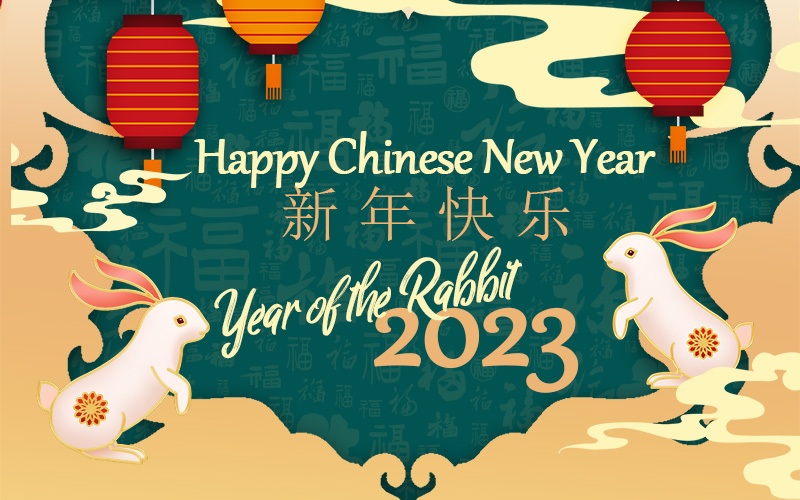